One might wonder what a speech-language pathologist is doing at the Monell Center, with its half-century of focus on the chemical senses of taste and smell. Well, to Center postdoctoral fellow Carolyn Novaleski, PhD, it makes perfect sense. As a scientist with a mission to help people with voice, breathing, and cough disorders, Novaleski came to the Center to achieve that goal.

“We are seeing an emerging patient population who are having problems coordinating the vocal cords during breathing and also have heightened cough responses,” she notes. “I want to see if there is a connection with chemical sensing in the larynx.”

Novaleski knew when she entered college that she wanted to be involved in health care. As her studies progressed, she found herself drawn to learning more about speech pathology and voice production. Traditionally focused on disorders related to speaking and singing, the field of voice science more recently has expanded to include biological mechanisms related to respiration and cough.

“What really interested me was how multi-faceted voice disorders are,” she says. “Addressing the problem involves using auditory perception to assess voice quality, making a medical diagnosis of vocal pathology, evaluating biomechanics to understand vibratory stresses to the tissue, and addressing the impact on patients’ quality of life.” 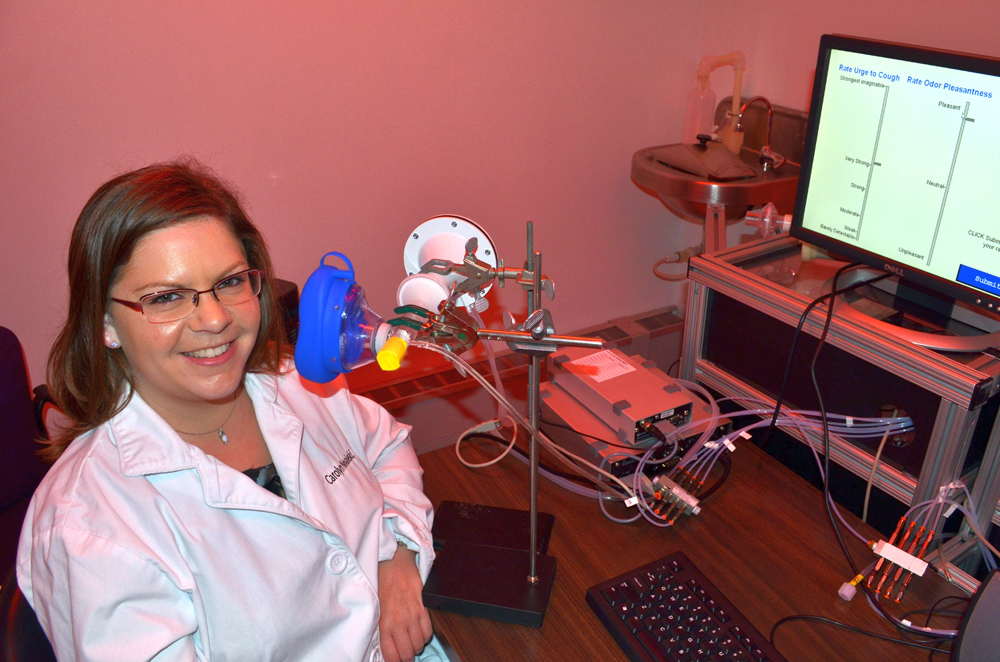 Dr. Novaleski in her testing room at Monell

But, something happened while Novaleski was on her way to becoming a clinical speech-language pathologist: she discovered research. Attracted by the opportunity to ask and systematically answer clinically-relevant questions, she followed her Master’s degree in speech pathology with doctoral studies focused on biomechanical injury to the vocal cords, which can result from excessive use of the voice such as yelling or frequent talking. Vocal cord trauma can also occur from persistent coughing.

It was at a graduate school seminar that Novaleski first learned about solitary chemosensory cells (SCCs), chemically-sensitive sentinels that detect the presence of irritants and pathogens and then trigger inflammatory and immune responses. These specialized cells, which contain receptors for the third chemical sense, chemesthesis, have several molecular components in common with taste cells. SCCs line the membranes of the respiratory, urinary, and digestive systems – and are also found in the larynx, the structure located at the top of the trachea that commonly is called the voicebox.

SCCs intrigued Novaleski because of their protective function, leading her to wonder if they are perhaps related to the larynx’s role in protecting the lower airways via closure of the vocal cords. A lightbulb went off in her head.

An estimated 22 percent of people admitted to the emergency room for shortness of breath have what’s known as ‘vocal cord dysfunction’. And roughly half report that an odor triggered the episode.

“Patients experience these breathing or coughing episodes at different severity levels, but it’s common for patients to explain that they don’t want to leave the house for fear that smelling an odor or chemical will trigger an episode,” says Novaleski. “It can significantly disrupt their lives. And the underlying cause is unknown.”

When people with vocal cord dysfunction suffer a breathing episode, their two vocal cords inappropriately close during inhalation, limiting airflow to the lungs. Patients often report that they feel like they’re suffocating, even though in most cases some air can still squeeze through a small opening between the vocal cords.

“I envisioned a whole new field merging vocal cord dysfunction with the chemical senses and thought it would be a really fascinating area to dive into,” Novaleski says. “I see many clinicians seeking answers about this disorder, with very limited diagnostic and treatment information available. At clinical conferences, I’m typically standing in the back because essentially every seat in the room is filled. There is a clear need for research in this area.”

Sensing an opportunity to better understand how odors and irritants can trigger vocal cord dysfunction and the related coughing, Novaleski applied to the Monell Center’s postdoctoral training program and arrived at the Center in July 2016.

Working with cognitive and environmental psychologist Pamela Dalton, PhD, MPH, and olfactory neuroscientist Joel Mainland, PhD, she learned about sensory evaluation techniques and also how to use breath measurement instrumentation from Mainland’s lab. Putting the pieces together and working with a third mentor, clinical cough scientist Karen Hegland, PhD, from the University of Florida, she recently received a prestigious NIDCD Postdoctoral Individual National Research Service Award, awarded to broaden a fellow’s scientific background and extend their potential for research in specified health-related areas.

Moving forward, Novaleski’s initial experiment will expose healthy volunteers to an odor and then relate their sensory responses to their breathing patterns and cough production. She also will empirically measure cough responses, including the phase involving vocal cord closure during cough, using a technique called objective cough aerodynamics.

Novaleski’s goal is to determine if odor-induced coughing and inappropriate vocal cord closure can be modified by retraining people’s breathing patterns, as respiratory retraining is currently the gold standard treatment in many clinics. With that in mind, she will next train the volunteers to use a behavioral breathing exercise and then expose them to the odor again to see if the behavioral exercises can reduce the odor-stimulated cough. 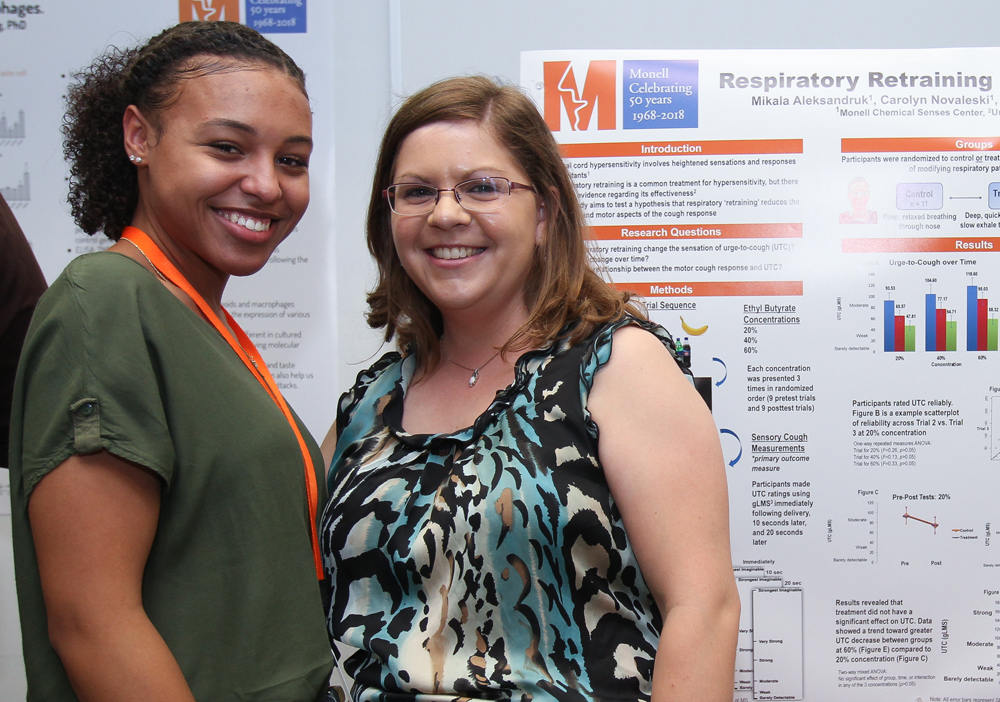 More minds on the project: Dr. Novaleski mentored a summer 2018 participant in the Monell Science Apprenticeship Program through a study of behavioral breathing exercises

Initial efforts focus on healthy subjects in order to provide a baseline for future studies with vocal cord dysfunction patients. Wanting to simulate real-world conditions, Novaleski will use the odor chemical ethyl butyrate to provoke cough in the volunteers. Novaleski chose ethyl butyrate, which occurs naturally in many fruits and is commonly used as a flavoring in fruit products, as her stimulus based on the observation of a member of Mainland’s lab, who noted that she always coughed when working with the compound.

“Collecting objective measurements from healthy volunteers will facilitate later studies with vocal cord dysfunction patients,” said Novaleski. “Long-term, I hope to better define the scope of this disorder. I suspect that many patients diagnosed with asthma may not actually have the disorder and are therefore resistant to conventional treatment. Ultimately, a more precise definition for vocal cord dysfunction will reduce the time it takes for clinicians to make a correct diagnosis and prescribe the appropriate interventions.”

Through her training with her Monell mentors and Hegland, Novaleski will advance research on vocal cord disorder diagnosis and treatment by standardizing experimental protocols to elicit symptoms, collect sensory evaluations, and measure breathing patterns and cough responses.

“Carolyn brings a novel perspective to clinical research by utilizing basic methods in the chemical senses to study breathing and cough disorders. While the underlying cause of vocal cord dysfunction is still unknown, her research to establish standardized methods to evaluate this condition can bring us closer to defining the disorder and identifying effective therapies,” said Dalton.

Staying close to the clinic

To highlight the clinical relevance of her work to voice professionals, Novaleski recently presented a poster at The Voice Foundation Symposium, a leading conference in voice science attended by scientists, physicians, speech-language pathologists, and singing coaches. Her presentation reviewed clinical studies of breathing disorders characterized by vocal cord dysfunction, and revealed a demonstrable relationship between exposure to odors and irritants and the development of symptoms. 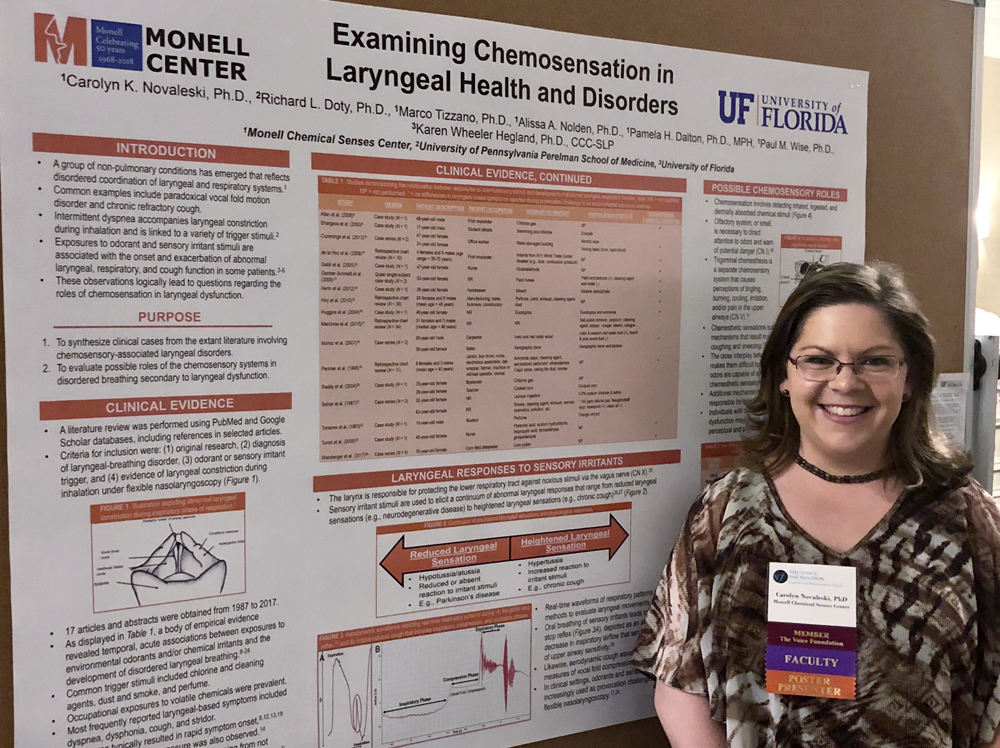 Awarded a first-place prize for her poster, Novaleski hopes that her analysis will stimulate other voice professionals to consider the role of chemosensory exposure when diagnosing and treating vocal cord dysfunction.

“The ultimate goal is to get this closer to the clinic,” Novaleski says. “My high-quality mentoring team has helped me to develop and obtain funding for a unique area that I knew needed additional research, but I didn’t foresee exactly how that would unfold when I first arrived at the Center. But I got what I came for, which was to obtain a good in-depth knowledge of the chemical senses from different perspectives. That’s what the Monell Center does. And now I have my grant and am moving forward.”

← Meet the Postdocs, Part 2
Dealing with Those Telltale Malodors →