Welcome to the second installment of our series on Monell’s extraordinary postdoctoral fellows. We managed to coax another two postdocs out of their labs to speak with us about everything from science to pasta; from improving human health to Mozart.

If you missed the first one, read it here. 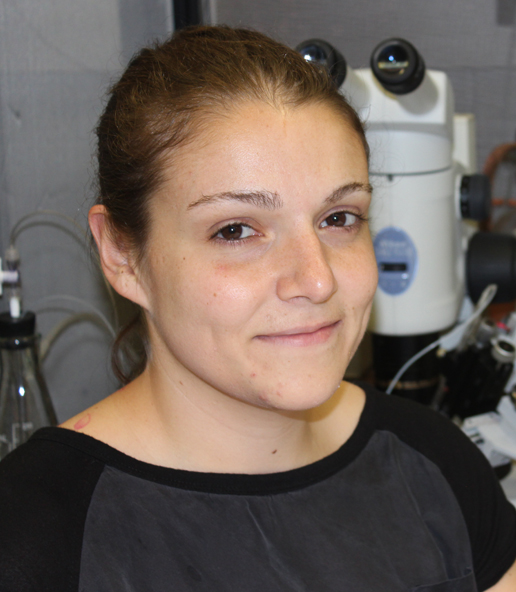 Federica Genovese, PhD, who received her doctorate in Neuroscience, works with Marco Tizzano, PhD, on understanding how the sense of smell and the sense of chemical irritation interact.

Q: How do you describe your research project to, say, your non-scientific family members?

I’m evaluating the interplay between two chemical senses. One is the olfactory system, our sense of smell, and the other is the pain system, which is the one that causes our eyes to sting and water when we cut onions. Believe it or not, these two systems partially overlap, but we didn’t know originally if they could “talk” to each other. Well, we have found that they do, and now I’m figuring out how.

My project mainly focuses on understanding how the olfactory system activates the pain system, and I’m studying this process through migraine headaches.

Migraines are mostly due to the activation of this pain system, which is also called the trigeminal system. But people with frequent headaches or migraines often report that they are very sensitive to odors, or, for some, that a specific odor induced the migraine. That leads to some important questions: What are the features of a migraine-triggering odor? Can we use this olfactory-trigeminal interaction to reduce or prevent migraines? These issues are at the heart of my project.

I was just home in Italy visiting my family, and I had to do this multiple times.

Q: What brought you to Monell from Italy?

My Master’s and PhD projects were related to what I’m doing now. For both, I studied how the trigeminal system can modulate the olfactory system. During my Master’s, in Italy, I focused on the olfactory epithelium and during my PhD, in Germany, I shifted to look at the olfactory bulb. Ultimately, we discovered that a specific molecule that’s released when the pain system is stimulated actually modulates the activity of the olfactory sensory neurons. This was exciting.

I shared some of this data at a big olfactory and chemosensory conference in Japan called ISOT (International Symposium on Olfaction and Taste). Dr. Tizzano visited my poster and told me he was looking for a postdoc. The timing was right – I was looking for a postdoc position! ISOT was in April, I interviewed at Monell in September, I received my PhD in December, and I started my postdoc in Dr. Tizzano’s lab in February.

Q: Did you know about Monell before you met Dr. Tizzano?

Absolutely. In my case, the Monell name meant a lot. Three-quarters of the papers I was reading came from Monell. I knew of Johannes Reisert and Graeme Lowe and their work – the researchers here are internationally really well known in the field.

I find the Center’s philosophy really appealing. We are very specific about the chemical senses, but we use every possible approach to the subject. Since we work with everything from single cells to people, I figured it was a good way to become a well-rounded researcher. Sometimes scientists can get lost in the theoretical aspects of research, which can be a sterile approach to science. I’m about to start working with migraine patients, trying to improve their health. Interacting directly with patients is motivating. It feels like I can make a real difference. 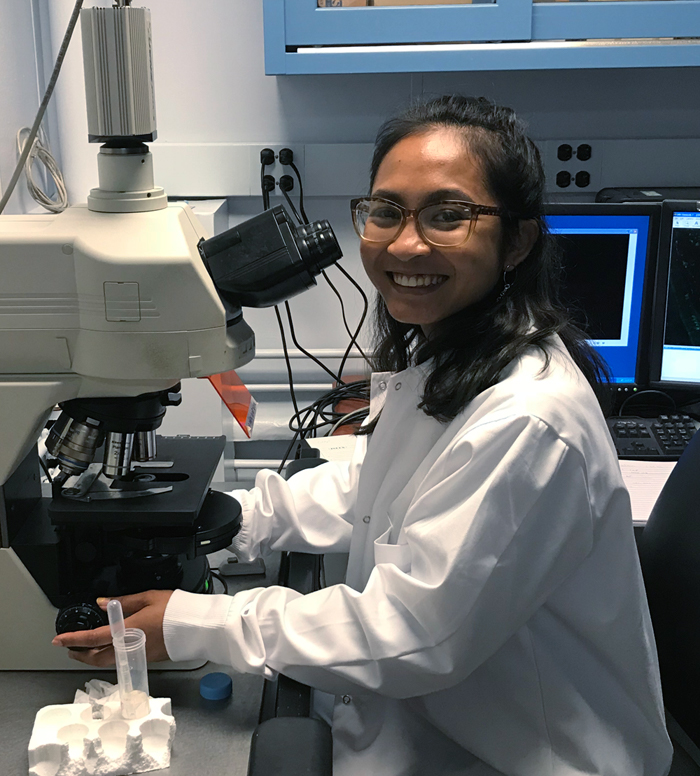 Also, I care a lot about mentoring. It’s important to me to pass something to the next generation of scientists, to improve their scientific approach and foster a love for it. The Monell Science Apprenticeship Program – MSAP – is really one of the best ways to do that. It’s a special situation where we get to work with motivated kids who might not otherwise have the chance to do science. I feel a big responsibility to be a part of that process.

Q: What drew you to science?

Apparently, I started claiming that I wanted to be a scientist when was a child. My mom was super surprised – I wasn’t even six. Then I discovered that “scientist” wasn’t accurate, that “researcher” was more accurate. I was mad at my mom for not correcting me, when she didn’t even know the difference!

This is crazy, actually: I had a very good biology teacher in high school. What I didn’t know until about four years ago is that her doctoral project involved the olfactory epithelium, which I still study. She even met David Ottoson, the man who invented electro-olfactography, a research technique I use here at Monell.

I think with all these steps, it feels like I was supposed to study this, and be here to do it.

Q: Tell me something about yourself that’s surprising.

I don’t like pasta. I’m not a pasta fan. Here or in Italy. 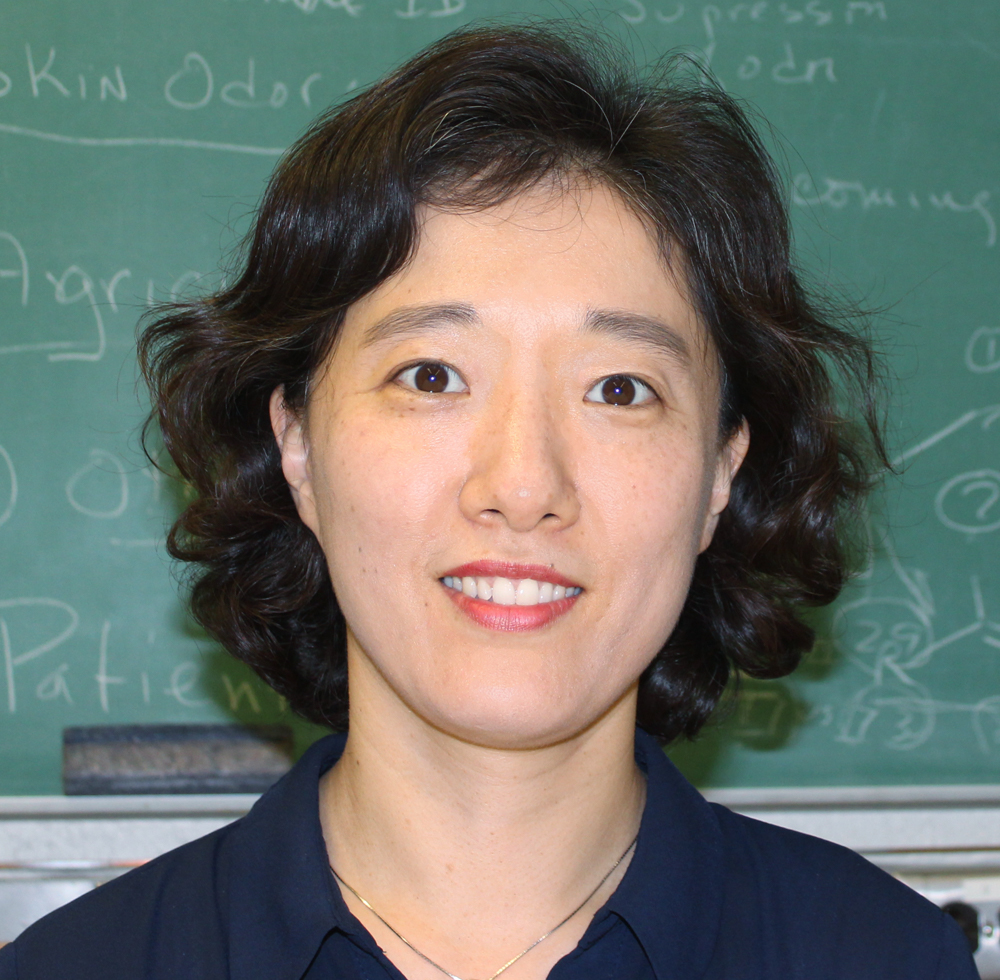 Young Eun Lee, PhD, who received her doctorate in Organic Chemistry, works with George Preti, PhD, on identifying the characteristic odor of ovarian cancer – a “silent” killer that often doesn’t present symptoms until it’s too late to effectively treat.

Q: How do you describe your research project to people without a scientific background?

I’m working on a project to detect ovarian cancer by smell. Ovarian cancer is one of the hardest cancers to diagnose and treat because it’s very hard to detect in its early stages.

We know that animals and humans emit odor compounds into the air, and we can gather information from these odors. Recently, we have shown that as a person’s metabolism changes due to ovarian cancer, the compounds emitted by the body also change.

Our job involves identifying the characteristic odor signature from the blood plasma of ovarian cancer patients. Eventually, our collaborators at Penn will use this information to make an “electronic nose,” a sensor which we hope will provide accurate early detection of ovarian cancer when it can still be treated.

Q: What does a typical day in your lab look like?

My daily routine involves checking the lab instruments and analyzing blood plasma samples. This summer, I spent time with the cancer-sniffing dogs at the Penn Working Dog Center. The dogs were the proof-of-concept for this project. They learned to distinguish by smell the ovarian cancer plasma samples from healthy plasma samples, so we knew the samples must have noticeably different odors. 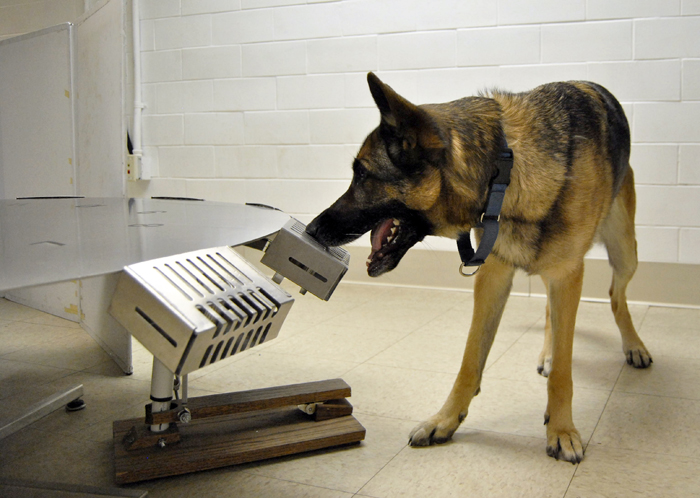 Recently, I collected just the air above a cancer blood plasma sample, and presented this air to the dogs. They were able to identify it as ovarian cancer, just by smelling the air with the odor molecules in it! They didn’t even need the blood plasma! This recognition was exciting, even thrilling. It was more evidence that ovarian cancer emits identifiable odor clues.

Q: You’re in a chemistry lab here at Monell – what drew you to chemistry?

I have always found chemistry fascinating. Compounds are being created and destroyed all around us, and we can’t see it happening. I chose to pursue organic chemistry because creating a complex molecule felt like assembling invisible Lego blocks. It is exciting to build something with my own hands, whether it’s a complicated chemical compound or a toy building.

Q: What brought you to Philly?

My family moved from South Korea to Philadelphia in 2007 when my husband decided to get his PhD. This was my first foreign country, and we’re still here!

My husband and our three children, who are 14, 12, and 11 years old. My husband did his doctoral studies at the University of Penn under Dr. Amos Smith, who is also a Monell faculty member. That’s actually how I ended up at Monell.

During my postdoc at Temple I worked with Dr. Bill Wuest, one of Dr. Smith’s former students. After a few years, Dr. Wuest moved to Atlanta, Georgia, and I couldn’t follow him because my family and kids were here. So I needed a new position.

Around the same time, Dr. Preti received a grant for his ovarian cancer research and called Dr. Smith for postdoc recommendations. Dr. Smith knew me through my husband, and also knew that my mentor had moved away. So he suggested me to Dr. Preti, and I came to Monell!

You know, when I was getting my PhD at Penn, I passed by Monell and saw the golden nose statue out front every day. I had no idea that I would end up working here. I like it here.

Mostly, I like the collaborative atmosphere of the Center. Researchers from different backgrounds all work together and respect one another. I feel stronger bonds among the scientists here than in other places I have worked. This is the best part of Monell!

Also, I feel that the ovarian cancer detection project I’m working on is very important and could greatly improve human health.

Q: What would you tell someone who wanted to be a scientist?

My kids all want to be scientists! I think science is the most impactful way to contribute to the world. You have to have a clear mind to help the world and other human beings. I encourage them to pursue science, if that’s what they want.

Q: What do you like to do in your spare time? (Do you have any with three kids?)

I like to read or listen to classical music when I have time. Most of the time I sleep, honestly. I read everything, novels, cookbooks… but mostly in Korean. I try to read in English but I still have a language barrier, even after ten years here.

I like especially Mozart. I don’t know why, but his music is very inspiring, and his piano sonatas calm me.