“Yoga teaches us to cure what need not be endured and endure what cannot be cured.” ~ B.K.S. Iyengar

Dean Jerrehian is serious about giving back. His Philadelphia-based company, JadeYoga, which makes eco-friendly yoga mats, plants a tree for every mat sold, introduces yoga to underserved populations, and routinely donates a portion of its proceeds to causes ranging from environmental action to child abuse.

Nevertheless, when Jerrehian first contacted Monell in 2014, no one expected that Jerrehian and JadeYoga would be supporting the Center’s research to identify the scent of ovarian cancer. Then karma intervened.

Jerrehian reached out to Monell via email with a question about one of his products, a yoga mat made with natural rubber tapped from rubber trees. Using natural rubber makes Jade’s yoga mats less slippery and also environmentally sustainable. However, natural rubber also has a distinctive smell, and even though it disappears after a few weeks, Jerrehian wanted to learn more about the nature of the odor and also about human olfaction to see if he could address this issue for his customers.

“I heard a story about Monell’s research on the radio and remembered driving past the golden nose statue when I was a student at Penn. So I thought, ‘Maybe they can help,’” he recalls.

Responding to Jerrehian’s email, Director of Institutional Advancement Carol Christensen explained how analytical chemistry can be used to separate and identify the specific odor components in a mixture.

As an example, she described how Monell researcher George Preti is using analytical chemistry to identify the scent of certain diseases, including ovarian cancer. And just like that, Jerrehian was interested in much more than yoga mats.

“A friend of mine died of ovarian cancer,” he wrote. “Please tell me more.” 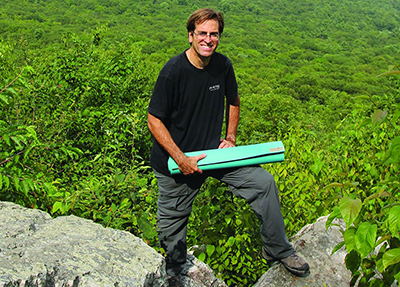 Christensen described Preti’s collaborative project to identify the unique olfactory signature of ovarian cancer. The team’s ultimate goal is to develop a sensitive and reliable odor sensor that doctors can use to detect the deadly disease in its early, treatable stages.

First, trained dogs from Penn’s Working Dog Center distinguish blood samples from women diagnosed with ovarian cancer from those from healthy volunteers, providing proof of principle that the cancer has a unique odor signature. Then analytical chemistry done at Monell identifies precisely how the pattern of odor chemicals differs between samples from the two groups. Finally, researchers from Penn’s Nanotechnology Center use this information to program a small nanosensor capable of doing what the dogs do – identify blood plasma from women with ovarian cancer.

Originally funded by a grant from Kaleidoscope of Hope, an organization of ovarian cancer survivors, the project has shown promising results and now needs additional funding to continue.

“I want to help,” replied Jerrehian.

He explained that one way Jade works with the yoga community to support causes is through its “Color Care” program, donating $5 from each sale of a specific color mat to charities focused on a corresponding cause. Sales of teal mats, representing ovarian cancer, have been by far the most popular, enabling Jerrehian to surprise Monell in December with a very generous donation of $50,000 to support the Center’s ovarian cancer research. 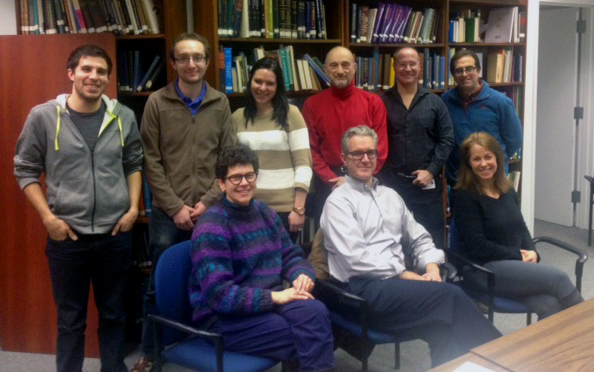 Dean Jerrehian (back row, far right) visited Monell to meet collaborators involved in the Ovarian Cancer Consortium (click the photo to learn more about the Consortium)

“Dean’s support is essential to allowing us to move forward,” said Preti. “Ovarian cancer kills over 14,000 American women every year. We will be able to save many of those lives when can detect this silent killer in its earliest stages.”

And the rubber smell? No promises, but they’re working on that too…