Research at Twinsburg: A Retrospective

It’s difficult to describe the otherworldly feeling of walking around a festival surrounded by thousands of mirror images – but that’s Twinsburg in a nut-shell.

The 2015 Twins Days Festival in Twinsburg drew 2041 sets of twins and multiples, many of whom dressed alike (or in costume) to emphasize their similarities.

And there were a great many similarities.

While the twins were seated apart during the Monell sensory test, they registered for the study together. As they did, many of them unintentionally answered the registration questions in unison (which never surprised them, and never failed to surprise the researcher). Some even consulted each other to place their study identification stickers in the same place, to reinforce the illusion that they were the same person in two bodies. 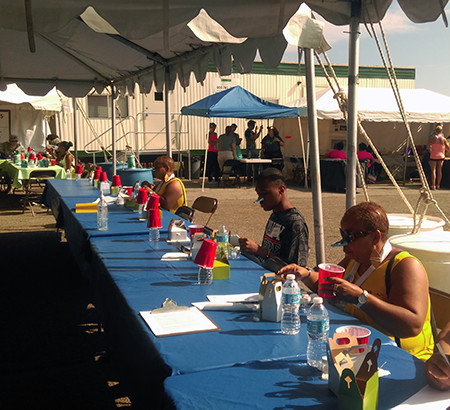 Of course, even if they look identical, each is a separate individual. In some cases, though, that can be a difficult concept to grasp.

In 1975, a French psychologist named René Zazzo published a paper about twins and self-recognition in which he found that identical twins between 1 and 3 years old could not distinguish between their own reflection in a mirror and their twin.

Imagine seeing your reflection and not knowing if it was you or an entirely separate person.

Once you are able to differentiate yourself from your twin (and your reflection), there’s still the question of how to describe your relationship to your twin. Are you identical or fraternal? Not all of the twins we spoke to knew the answer.

Contrary to popular belief, it’s not possible to tell just by looking – the only way to know for sure if twins are identical or fraternal is through genetic testing. Identical twins are “monozygotic,” meaning they both developed from the same fertilized egg (“zygote”), which split soon after fertilization. As a result, identical twins share 100% of the same genetic code. Fraternal twins are “dizygotic,” coming from two different eggs that were fertilized by two different sperm. Fraternal twins are, essentially, traditional siblings who happen to be born at the same time. On average fraternal twins share about 50% of the same genes – the same as any pair of siblings born to the same parents. 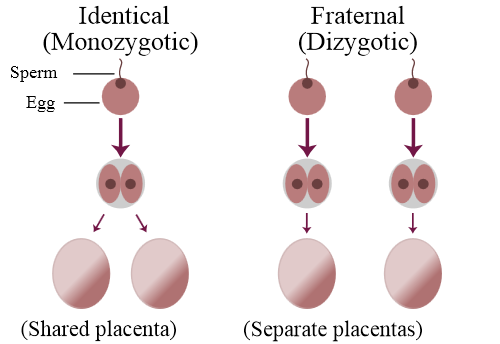 It’s the genetic overlap in twins that makes the pairs such valuable research subjects. However, not everyone knows that, even those you might expect should know it best.

“Not that I’m complaining, but…”

Some of the twins at the festival weren’t sure why we (and seven other research teams this year) were so interested in studying them. We were compensating them for their time and effort, but why? As we explained in “Why Twins?“, it’s a question of nature vs. nurture.

Since many traits have both genetic and environmental factors, studying twins in relation to particular traits, such as sensitivity to sweet taste or ability to smell a certain odor, enables researchers to understand how much of the individual variation in that trait is genetically influenced.

If a strong genetic component is found, researchers can then move forward and work to identify which genes affect the trait, and how.

At Monell, we use this twin-derived information to explore sensitivities to sweet, sour, and salty tastes, among other health-related endeavors. Twin data may also help us understand whether genes contribute to susceptibility to acquired smell disorders, including anosmia.

Scientists at Monell have been studying twins since the 1980’s. In 1984 two prominent Monellians published a twin study that demonstrated a genetic basis for the inability to smell the odor of a volatile steroid called androstenone. This foundational paper laid the groundwork for understanding how genes contribute to odor perception. Since then, Monell researchers have contributed to numerous other twin studies.

Some of the twins who took part in our study hadn’t realized how important their shared genetics were to scientific exploration, and they were excited to hear that they had a unique ability to contribute to our understanding of the senses.

Interestingly, some of the twins were just as overwhelmed by the sheer number of copies as the first time researchers on the Monell team. It was easy to forget that just because they are twins doesn’t mean they interact with other twins very often. It’s one of the reasons many of them come to Twinsburg: a chance to share their experiences with others who understand their unusual perspective.

Next year in Twinsburg

Many pairs of twins (and one set of triplets) thanked us as they left the Monell study tent. “See you next year!” they called.